The new ASICS Trabuco Max is a trail shoe that will give you a unique experience in off-road adventure. You receive superior cushioning and traction, so you can runs at your best, using less energy, even if you are out on the trails for many hours. In this ASICS Trabuco Max review, we’ll give you a rundown of precisely what it has to offer trail fans.

Table of Contents For The Review

Product prices and availability are accurate as of the date/time indicated and are subject to change. Any price and availability information displayed on [relevant Amazon Site(s), as applicable] at the time of purchase will apply to the purchase of this product.

Product prices and availability are accurate as of the date/time indicated and are subject to change. Any price and availability information displayed on [relevant Amazon Site(s), as applicable] at the time of purchase will apply to the purchase of this product. 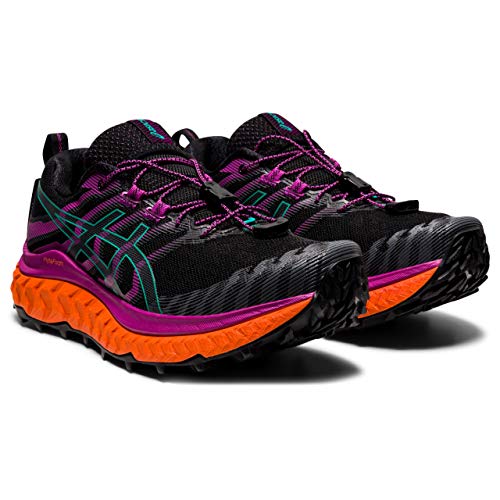 If you owned ASICS road running shoes, you quickly would recognise many of the Trabuco Max’s excellent features. You get a nice roomy toe box and an excellent secure fit. I would say the shoe is true to size, so if you have owned other ASICS models, go with whatever size you usually would.

The upper of the Trabuco Max includes an aggressive mesh-upper that does look a little bulky. Thankfully though, it is comfortable on foot, breathable and durable. As a result, you can stride through the most challenging terrains knowing that the upper material will be able to take some punishment. ASICS have also included a toe overlay to protect your toenails from bashing on to trail obstacles. 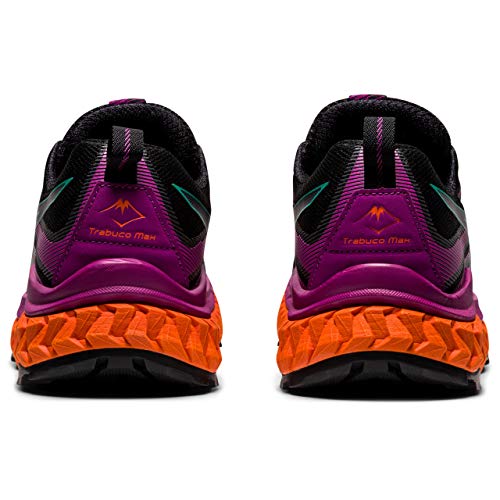 The heel cup on the shoe is stiff at first but still forgiving. Over time it will adapt to mould around the heel for a more bespoke fitting. The heel padding is plush, and you’ll experience minimal rubbing – unless, of course, you spend a tremendous amount of time on the trail, then everyone’s feet will take a bashing.

The ASICS Trabuco Max weighs in at about 290g (depending on your size). Trail shoes tend to weigh more than classic road running shoes, so if you are new to trail running, don’t be put off by this.

This Trabuco Max midsole allows you to run for longer or with less energy usage over the same distance on the trail. You will experience energy return, push-off assistance combined with plush comfort from another world. It will offer heavier runners a comfortable ride.

The ASICS Guidesole technology gives an even more responsive push-off and is scientifically proven to save energy over a more extended period. Furthermore, you’ll get an Ortholite sock liner that offers rebound qualities and outstanding moisture management to the inside. 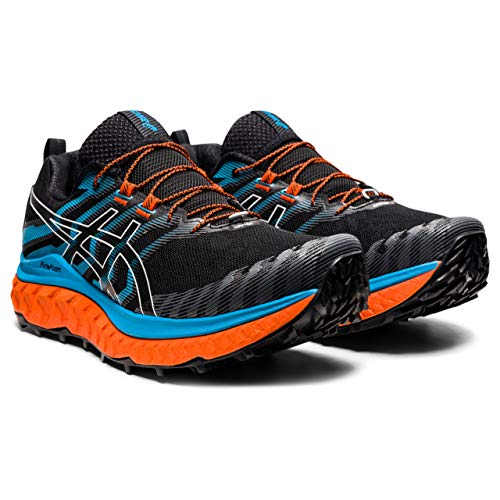 The ASICS attempt at a Quick-Lace system is similar to that found in Salomon trail shoes like the Sense Ride 4, which you’re either a huge fan or not at all. I love this type of lacing system, but I know not everyone does.

ASIC has pretty much copied the Salomon lacing system here – let’s not beat around the bush. There is also a tiny pocket on the tongue to stow the laces, like many Salomon shoes. It is a great system, and I don’t blame them for doing something similar. Your laces don’t move around with such a system, drag on the floor or get stuck on trail debris when running.

We think ASICS have done an okay job with the Quick-lace system. The way you fasten your lace at the start of the run is the same way it will be at the end. Some other reviewers I follow were not keen on the system. If you don’t like it, it can easily be replaced with better locking laces.

Grip and traction is a crucial factor for many when picking a trail running shoes and the ASICS’ Grip technology delivers what you need. The lugs are not massive, only 4mm long; however, the outsole does an outstanding job on lighter terrain trails. The lugs are arranged in a multi-directional pattern, securing a steady foot position when running uphill and downhill. 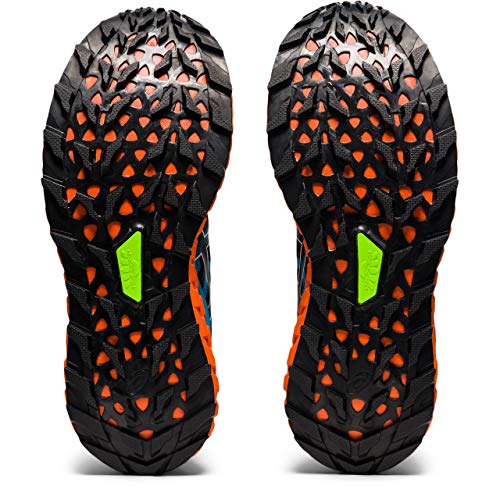 The shoe delivers an exceptional grip on ice, wet rocks, sleet, snow, muddy gravel roads and especially on dry surfaces. You can efficiently run on pathways or asphalt and work well on the road to cover harder surfaces to get to your trail route.

However, just one slight caution, the Trabuco Max isn’t the best trail shoe if you are running on very soft or muddy surfaces. If that is what you need, look at our guide to the best trail running shoes for mud.

ASICS trail game has kind of always been a bit so so. Whacking a bigger tread on a road running trainer doesn’t make it a viable trail shoe. From out ASICS Trabuco Max review, it looks like a break from that trend. I’m hoping this is a declaration of their plans with their future trail shoe range. Well worth adding to your rotation or great for road runners who use ASICS and want to try some trail running.

Thanks for taking the time to readour ASICS Trabuco Max review, if you are a fan of ASICS, then head on over to our ASICS Gel-Nimbus 23 Lite Show Review for another great option.

Disclaimer: This guide contains affiliate links, and I earn a small commission from any sale that occurs via my links. This, however, does not change my opinion; I always do my best to provide the facts and suggest products that will benefit my users. You pay no more and no less for using these links. It does, however, help to sustain my blog.